It never ends. It matters not where the issue or difficulty may be in the world; it's always another opportunity to build a new base.


A detachment of U.S. airmen recently returned to the South American country of Guyana for the first time in a decade in an effort to shore up relationships amid growing tensions in neighboring Venezuela.

The four-month long New Horizons humanitarian outreach program, led by the Air Force, was meant to be a stepping-stone toward a prolonged relationship with the Guyana defense force. Air Force officials hope the serviceâ€™s relationship with the Guyanese military remains strong, especially as Russia and China continue to encroach into southern hemisphere and political unrest in Venezuela shows no signs of subsiding.

"Guyana is going to become a larger player in this region, both economically and politically in the future, so it's important that we are closely tied with them," Maj. Gen. Andrew Croft, 12th Air Force (Air Forces Southern) commander, said in an interview.

"What we leave is an enduring, physical presence in addition to the partnerships that we build," he added, citing medical facilities and schools built in 1997 that are still used today.

Roughly 600 service members participated in the project to construct community centers and a women's shelter in Guyana, on South America's northern coast.

Air Force and Army personnel, who worked in areas near port cities such as Port Mourant, New Amsterdam and Georgetown and in the countryside near Linden, also conducted several medical outreach and veterinary events that brought in 13,446 patients, according to officials who participated in the exercise.

That presence reminds local communities and government that the U.S. will be there, not only to help its citizens in future rotations, but also for emergency response.

So, "Emergency Response" must be the latest euphemism for "bombing a regime we don't like?" Anyway...


Only one other thing today, and it's about the weather. Hurricane Dorian has yet to resolve itself into coming ashore in the US or staying out to sea, but there are mandatory evacuation orders all over the Southeast coast. Except for the handful of bravado that has decided to "ride it out".

Hurricane Dorian as category 3 as I write this - with a sustained windspeed between 111-129 miles per hour. That translates to an F-2 tornado on the Fujita scale. So a generic question for those that would shelter in place....if you saw this bearing down on you: 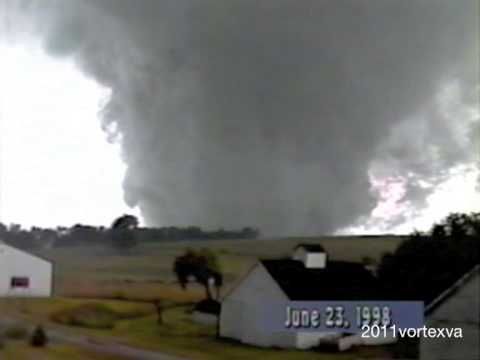 You'd get the hell out of the way, wouldn't you? So how come you stay when a hurricane that has the same strength blows on through?

At least the military has some sense in that regard...

Florida-based troops and their families are being urged to make hurricane preparations as Hurricane Dorian picks up speed as it careens toward the state, forcing aircraft and ships to be moved out of the storm's path.

Dorian is expected to make landfall in Florida on Monday evening as a Category 4 storm. The hurricane is expected to pack 140 mph winds and pummel the state with heavy rainfall, bringing the threat of dangerous storm surges.

Maj. Gen. James Eifert, head of the Florida National Guard, said during a Friday press conference that nearly 2,000 Air Force and Army Guardsmen would be mobilized by the end of the day.

MacDill Air Force Base, home to U.S. Central Command and Special Operations Command, evacuated its KC-135s from the 6th Air Mobility Wing, according to base news release. The base has 24 assigned tankers and is expected to fly out at least 18, according to the Tampa Bay Times. The aircraft will be temporarily stationed at McConnell Air Force Base in Kansas, through the duration of the storm.

Should the hurricane follow one of its projected models straight for Tampa, the surge "could cause significant ... flooding," MacDill officials warned on Facebook. "It would also cause a base evacuation 24-48 hours in advance of the storm's arrival. As you can imagine, we are hoping for the best but preparing for the [worst]."

"We realize that everyone is waiting for the base to make an evacuation decision," the message added. "We will coordinate any evacuation order with Hillsborough County and mission partners."

I have numerous friends and family throughout Florida - all I can say is so far all is quiet. The end result remains to be seen.