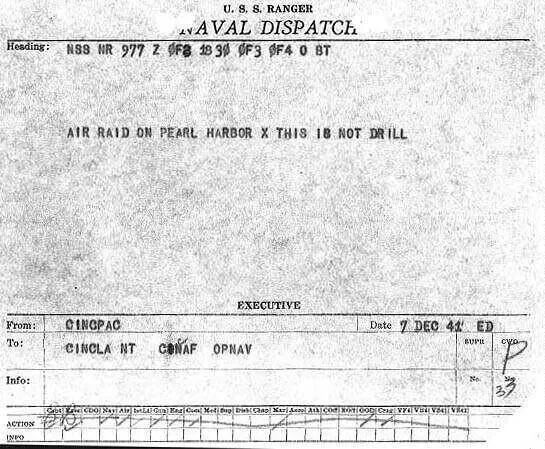 It was eighty years ago today that World War finally reached America. Some of my forebears were in that original wave of "Antifa" that reached the Norman shore..but most of them served in the Pacific against Japan.

I have been there. In May of 2002, we were in Manila briefly to find a small waif that needed a new home in America. The Ancestral isle of my family suffered horribly at the hands of Imperial Japan.

In a place called Fort Santiago, even today there are caves and dungeons that were used by the occupying army to torture and dispose of Filipinos. I remember it to this day, our tour guide noted that nobody knew how many bodies were there, as they were still discovering them some sixty years later (at that time.)

Revisionist history regarding the atomic bomb is something I choose not to participate in - but I will only say this. My great-uncle Ray Moore got to live to be 85, helped to put man on the moon (and help save Apollo 13) because he DIDN'T have to invade Japan.

Today, there will be much ceremony and somber remembrance at the site of those long-ago events. I heard on the news yesterday of two survivors that were making the trip, including one sailor at age 101 that was on board the USS Oklahoma.

One would think that such an important event in the nation's psyche would be accurately memorialized - but as it turns out, the National Memorial at Pearl is littered with errors. At least a handful of veterans are trying to get that corrected.

On Dec. 7, 1941, under fire, he helped move the mortally wounded commander of the battleship West Virginia to safety and then manned a machine gun -- a weapon he was barred from training with because of his race -- to fire at attacking aircraft.

A sign at the Pearl Harbor National Memorial visitors center says Miller died on the USS Liscombe Bay in 1944 at the Battle of Leyte Gulf.

Miller actually died the year before, 1943, on the USS Liscome Bay, at the Battle of Makin Island.

The error about an icon for the civil rights movement, whose name will adorn a future Ford-class aircraft carrier, is one of several at the Pearl Harbor National Memorial that simply drive historians and history buffs nuts.

At least one is working to get them fixed.

"I've been tilting at this windmill since 2013," said former Navy aviator and retired Capt. Charlie Gillman. "How many thousands of people have to see these things and they're wrong?"

In addition to the Miller blunder, there are mistakes in photos: a 1941 photo of a Navy PBY Catalina aircraft that is dated as being from 1943 and a photo of the Japanese carrier Shokaku from the Battle of Santa Cruz in 1942 that is mislabeled as the Akagi, taken on Dec. 7, 1941.

Some photos are missing captions; others are incorrectly labeled or don't properly illustrate the display. And the USS Arizonaâ€™' memorial wall contains five names that don't have ranks or rates.

"What does it take to get these guys to fix these things?" Gillman asked during an interview with Military.com. "If they asked for money, perhaps they think they're putting themselves on report for screwing this up in the first place at taxpayer expense."

And even though you are reading this on December 7, I've been writing these on the day previously of late. Noting that as I write this, it is December 6, so I must at least mention in passing this horrific event that took place 24 years before Pearl Harbor.

It is why the Official Boston Christmas Tree comes from Nova Scotia every year.

Like Manila, I too have stood on the shores of Bedford Basin and contemplated what happened there.