We'll start as we alwas do; with the latest casualty figures from our ongoing wars, courtesy of Antiwar.com:


This morning....the day after Memorial Day...we find this morning's cost of war passing through a new milestone. It's been a long time coming, but nevertheless it's a tough number to take.

Small wonder the economy is in the shitter.

Did you happen to catch the right's latest false flag operation? I only saw it in passing myself, but I have no idea how much print and airtime was devoted to President Obama's "snub" of veterans, by way of his making a speech at a national cemetery in Illinois instead of at Arlington. Of course the administration was represented by Vice President Joe Biden. 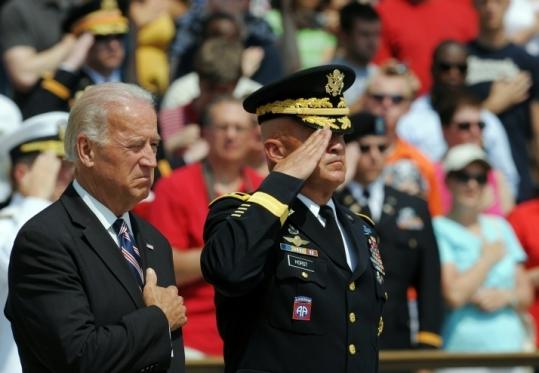 The ceremonies at Arlington are a mid 20th century innovation; this is not a centuries-old cherished tradition. The Right of course had no problem whatsoever when Bush the younger was out of the country (once), Bush senior sent his Vice President (all four years) or hell, when the sainted Reagan laid a wreath at a Nazi SS Cemetery. But, I digress.


Ah, but there is a battle worth fighting over Memorial Day. Something we all take for granted...do you have a US Flag flying outside your house right now? Do you just assume that you can just hang one up anywhere, anytime and be done with it? A veteran in Wisconsin has been told that he has to take his flag down. (warning: Fox Link.) He doesn't own his own home, and his apartment association has rules banning the display of any flags or banners.

An Army veteran in Wisconsin will be allowed to display an American flag until Memorial Day, but the symbol honoring his service in Iraq and Kosovo must come down next Tuesday, his wife told FoxNews.com.

Dawn Price, 27, of Oshkosh, Wis., said she received a call from officials at Midwest Realty Management early Wednesday indicating that she and her husband, Charlie, would be allowed to continue flying the American flag they've had in their window for months through the holiday weekend. The couple had previously been told they had to remove the flag by Saturday or face eviction due to a company policy that bans the display of flags, banners and political or religious materials.

"It's basically an extension so we can fly the flag on Memorial Day," Price told FoxNews.com. "It does need to come down after that."

Charlie Price, 28, served tours of duty as a combat engineer in Iraq and Kosovo, his wife said. To honor his eight years of service, she began decorating their apartment during Veterans Day in November. An American flag topped off the display, she said.

"I knew it made Charlie really proud to see that," she said. "And this isn't something new. This has been up for quite some time now."

Veterans' groups were furious at the realtors' refusal to allow the flag to fly.

"As a veteran, it sickens me that the Dawn and Charlie Price's building management company would imply that the American flag could be construed as offensive by their residents," said Ryan Gallucci, a spokesman for AmVets.

"We're talking about our most revered national symbol. This is insulting to anyone who has defended our flag honorably, like Charlie Price."

Dawn Price said she now works to amend the federal Freedom to Display the American Flag Act of 2005, which states no "condominium association, cooperative association, or residential real estate management association" may stop someone from flying the American flag. The law, however, does not apply to renters.

"This has been eating at us since Friday," she said. 'The best way to fight this isn't getting an eviction and going after these people in court. That's just going to cost us a lot of time, energy and money."

Instead, Dawn Price said she either intends to place a curtain between the flag and the apartment window to block it from onlookers or will move it to a rear balcony come next week.

Officials at Midwest Realty Management, which manages Brookside Apartments, where the Prices live, did not return several messages seeking comment. In a statement to the Oshkosh Northwestern, company officials said the policy was established to provide a consistent living environment for all residents.

"This policy was developed to insure that we are fair to everyone as we have many residents from diverse backgrounds," the statement read. "By having a blanket policy of neutrality we have found that we are less likely to offend anyone and the aesthetic qualities of our apartment communities are maintained."

Despite the brief reprieve, Dawn Price said her husband is disappointed by the flag flap.

"He actually sees it as a slap in the face to his service," she said. "He's pretty upset about it, especially right around Memorial Day."

A Facebook group created by Dawn Price, "Freedom to Display the American Flag," had roughly 2,000 members as of Wednesday.

So it appears that some of those freedoms that our troops are 'fighting to defend' still need some work.