We're just back indoors from an overnight with the Cubbies at the local Girl Scout camp. I smell like smoke...so even though we were in a cabin, this counts as a camping trip as far as I'm concerned.


We were out for our annual Pumpkin Carve Overnight....all the kids all over the place and mountains of pumpkin guts. Some of the kids (or is that adults?) are certainly talented, to whit: 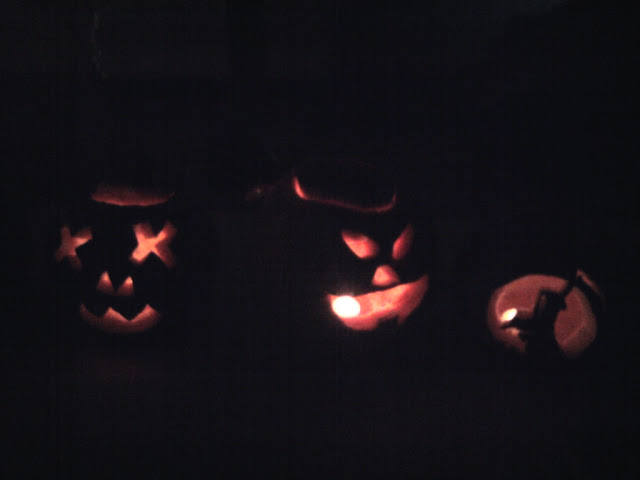 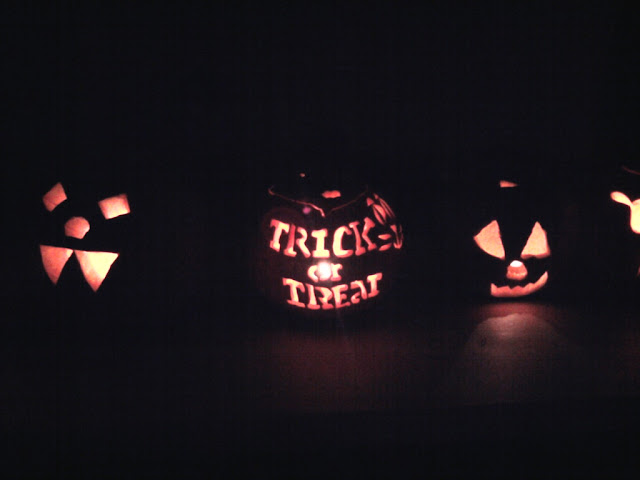 Ah, but being the TriSec, I can't just leave it at that now, can I? Halloween is one of those "cross-quarter" days...this one is about midway between the autumnal equinox and the winter solstice. It's also "All Hallow's Eve"...which is the day before All Saints Day, important holidays for certain religions.

Ever wonder why we celebrate weird days like this? It's worth checking out the table of common holidays and equinoxes. The author of the page sums it all up, probably nicer than I ever could.

You've probably heard of the Spring and Fall Equinoxes (times of equal-length day and night) and the Summer and Winter Solstices (longest and shortest day, respectively) before. In current usage these each define the official beginning of a season -- for example, summer ``begins'' around June 21st. However a less-used parallel system holds that June 21st is actually Midsummer's Day, which then requires the start of summer to be in early May. This date and three others like it are known as the Cross-Quarter Days, because they are evenly spaced between the fundamental Quarter Days of the Solstices and Equinoxes. The Cross-Quarter Days thus mark the middle of each season under our current system, or seasonal boundaries under the alternative system. Due to the insertion of a Leap Day on February 29th every four years, the exact dates of these eight astronomical events shift back and forth, with a total range of about 54 hours.

Ancient peoples were very attentive to seasons and the Sun's position in the sky, because their livelihood depended on planting and harvesting at the proper times. All eight of the above-listed Days were observed as pagan holidays of one sort or another; a few, like Halloween, have survived to modern times in (somewhat) recognizable form. What is more interesting is the number of supposedly modern holidays which lie in close proximity to the same dates. Christmas (Winter Solstice) and Easter (Spring Equinox) are two obvious examples; one may make the argument that these holiday times were inherited. Others are quite surprising -- like Father's Day (Summer Solstice)! What are the folks at Hallmark hiding from us? Of course, not everything lines up, and the nearness of Election Day to All Saints' must be pure coincidence. Right?

But then again...any holiday that gives me the excuse to post this video is worth it, right?