It's an early Saturday blog, but I'm not off to donate platelets today...(next week, though!). Nay, it's the last pre-peak weekend at the Bean factory, and I've got an opening shift.

I want to talk about Christmas trees today. (waits for shouting to die down.) I know it's a little early, but because of the brief ceremony that happened in my fair city this week, it's on my mind.

Do you put up a tree? Where do you stand on the great live/artificial debate? (and as a sub-debate, if you do put up an artificial one, is it still green, or do you have a different, new-age color?)


We always used to have a live tree...part of the ritual was heading out about 10 days ahead of Christmas and hunting around for one. Alas, over time all of our preferred spots seemed to have gone out of business. Finally, my first year at the store, I simply didn't have any time to follow the routine, and Mrs. TriSec bought a little four-footer of falsehood, and we've been using that ever since.

But what about your big-city tree? The tree at Rockefeller Center is legendary, and I believe the National Christmas Tree is a planted and living tree near the White House, yes?

Which at last brings me to Boston. Not quite 94 years ago now, this happened. 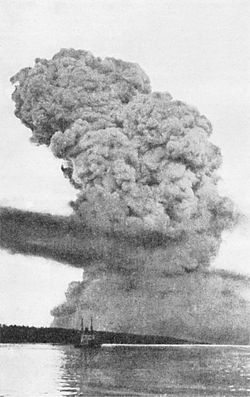 That's not Boston; the place is a few hundred miles northeast of here. That's Halifax, Nova Scotia underneath that cloud of doom. In 1917, much of the war material needed in Europe passed through the port, and one day a fully-loaded ammunition ship collided with an empty cargo vessel...unfortunately right in the heart of the harbor at a spot called 'the narrows'. A fire started, and not long afterwards the ammunition ship blew up. Halifax was devastated in what has been called the 'largest man-made explosion before the nuclear age'.

I've been there a number of times...modern Halifax is an astonishingly beautiful city. Clean, vibrant, historic, and all of it overlooking that spectacular harbor. I consider it my 'second city', and my favorite out of all the places I've visited.

In any case...with the disaster coming so soon before the holiday during a time of war, the response was predictable. Supplies, doctors, and every manner of help poured into Halifax from all across Canada and the United States.

My city's response was among the strongest of all, as noted in the article:

American support was strong, particularly from Massachusetts, with support trains bringing doctors, nurses, orderlies and much needed supplies to the effort. A relief train left from Boston, 1,100 kilometres (700 mi) away, at 10:00 PM on the day of the explosion. Relentlessly chugging through wintry terrain, it was delayed by heavy snowfall but reached Halifax a day plus a few hours later, at 3:00 AM on December 8, unloading much needed food, water, medical supplies, and some aid workers to relieve the Nova Scotia medical staff, many of whom had worked without rest since the morning of the explosion.

Which at long last brings me to my point. Yesterday, with police escort and all, a tree arrived from Nova Scotia to take up a place of honor on Boston Common. It's fairly significant this year...as it's the 40th anniversary of the tradition.

In 1918, Halifax sent a Christmas tree to the City of Boston in thanks and remembrance for the help that the Boston Red Cross and the Massachusetts Public Safety Committee provided immediately after the disaster. That gift was revived in 1971 by the Lunenburg County Christmas Tree Producers Association, who began an annual donation of a large tree to promote Christmas tree exports as well as acknowledge the Boston support after the explosion. The gift was later taken over by the Nova Scotia Government to continue the goodwill gesture as well as to promote trade and tourism. The tree is Boston's official Christmas tree and is lit on Boston Common throughout the holiday season. Knowing its symbolic importance to both cities, the Nova Scotia Department of Natural Resources has specific guidelines for selecting the tree. It must be an attractive balsam fir, white spruce or red spruce, 12 to 16 metres (40 to 50 ft) tall, healthy with good colour, medium to heavy density, uniform and symmetrical and easy to access.

For the Christmas tree extension specialist the "tree can be elusive, the demands excessive, and the job requires remembering the locations of the best specimens in the province and persuading the people who own them to give them up for a pittance." Most donors are "honoured to give up their trees... [and] most will gladly watch their towering trees fall" since everyone knows the reason it is being sent to Boston. The trees don't often come from tree farms, but from open land where they can grow tall and full. It is so important to the people of Nova Scotia that "people have cried over it, argued about it, even penned song lyrics in its honor."

Sometimes it's difficult to grasp the magnitude of historic events. I'll leave you with one more thing to ponder about how massive the disaster was. When the Mont Blanc exploded, it was essentially vaporized. A bit of shredded metal from the ship was found two and a half miles from the site at the end of an extension of the harbor called the "Northwest Arm". A historic footnote perhaps, until you consider that it was the several thousand pound shaft of the ship's main anchor. 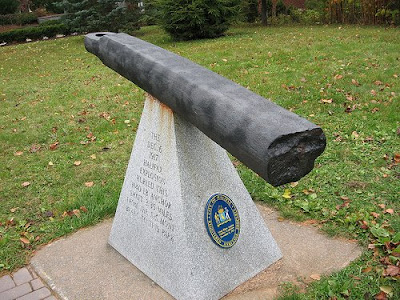 I know there are Christmas tree farms all over the northeast...and it's probably bad to look for a tree that had to be trucked hundreds of miles to get here...but when we did buy a live tree, I always insisted that ours came from Nova Scotia. How about you?
4 comments (Latest Comment: 11/20/2011 02:39:37 by wickedpam)
Perma Link