A frigate sighted on 19 August was determined to be HMS Guerriere, with the words "Not The Little Belt" painted on her foretopsail. Guerriere opened fire upon entering range of Constitution, doing little damage. After a few exchanges of cannon fire between the ships Captain Hull maneuvered into an advantageous position and brought Constitution to within 25 yards (23 m) of Guerriere. He then ordered a full double-loaded broadside of grape and round shot fired, which took out Guerriere's mizzenmast. With her mizzenmast dragging in the water, Guerriere's maneuverability decreased and she collided with Constitution; her bowsprit becoming entangled in Constitution's mizzen rigging. This left only Guerriere's bow guns capable of effective fire. Hull's cabin caught fire from the shots, but the fire was quickly extinguished. With the ships locked together, both Captains ordered boarding parties into action, but due to heavy seas neither party was able to board the opposing ship.

At one point the two ships rotated together counter-clockwise, with Constitution continuing to fire broadsides. When the two ships pulled apart, the force of the bowsprit's extraction sent shock waves through Guerriere's rigging. Her foremast soon collapsed, and that brought the mainmast down shortly afterward. Guerriere was now a dismasted, unmanageable hulk, with close to a third of her crew wounded or killed, while Constitution remained largely intact. The British surrendered.

Using his heavier broadsides and his ship's sailing ability, Hull had managed to surprise the British. Adding to their astonishment, many of their shot rebounded harmlessly off Constitution's hull. An American sailor reportedly exclaimed "Huzzah! her sides are made of iron!" and Constitution acquired the nickname "Old Ironsides".

The battle left Guerriere so badly damaged that she was not worth towing to port. The next morning, after transferring the British prisoners onto the Constitution, Hull ordered Guerriere burned. Arriving back in Boston on 30 August, Hull and his crew found that news of their victory had spread fast, and they were hailed as heroes.

We're blessed that the Navy takes good care of our ship, despite her nearly going to the breakers many times over her two hundred year career. In 1997, Old Ironsides came out of drydock after a multi-year rehabilitation and sailed under her own power for the first time in more than a century for her two hundredth birthday. 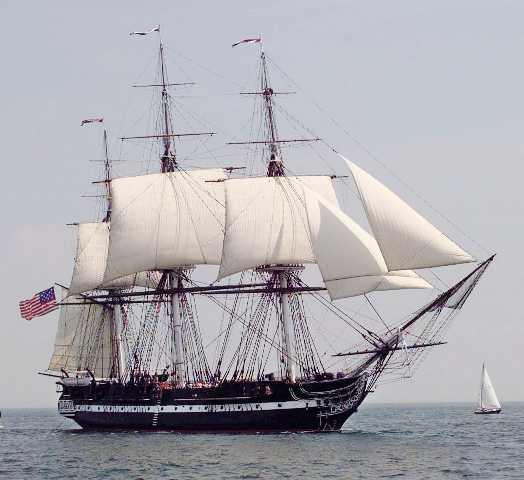 For just the second time in 131 years the USS Constitution will sail under its own power Sunday — the anniversary of its most famous battle — on a voyage that is expected to be as brief as it is momentous.

The world’s oldest commissioned warship afloat, which sailed in spectacular fashion to Marblehead for its 200th birthday in 1997, will be towed to a point almost midway between Castle Island and Deer Island around 11:30 a.m., Navy officials said. Some 200 sailors will unfurl four sails, including its basketball-court sized main sail, before casting its tugboat tethers aside.

For about 10 minutes the Constitution will sail freely toward open water, just as she did off the coast of Nova Scotia on Aug. 19, 1812. That was the day Old Ironsides earned its famous nickname by withstanding an attack from the British frigate HMS Guerriere in one of the first major American naval victories of the War of 1812.

It's difficult perhaps, for those outside our fair city to understand what she means to us, and indeed the entire nation. You're aware that the Constitution is the world's oldest commissioned warship, and the second-oldest preserved (after Lord Nelson's "Victory")., although the Victory is now permanently in drydock.

Years ago now, I entered the lottery to be aboard for the July 4 turnaround cruise...and won! After spending many years on a civilian boat watching it, to be aboard living history for our city's annual moment in the spotlight....Wow.

Two hundred years is a long time for anything to be preserved....here's hoping Old Ironsides is around for many more to come.