So, while I may have missed it, apparently Senator Brown debated challenger Elizabeth Warren in a controlled setting earlier in the week.

Despite all the issues going on, both locally and nationally, when Senator Brown was given the first question, the tack he took was right out of the birther playbook.

"The professor said she is a Native American, a person of color, and you can see she's not."

That's very prescient of our mercurial Senator. I wonder what other things he can tell just by looking?

He tries not to be a giant right-wing toolbag, but despite all the calm demeanor and "nice" campaign ads, he's still in the GOP's pocket.

I'm actually mystified by a new Brown ad that's been making the rounds on local radio. I've actually screamed back at this one, it's such a lie.

The ad features a woman claiming that Brown is pro-choice and supports equal pay:

Though the ad claims “his record shows that he supports women,” Brown’s voting history actually reveals the opposite. The senator has co-sponsored several anti-choice bills, including the Woman’s Right To Know Act, which would force a woman to wait 24 hours before getting an abortion and review pictures and information about her fetus. He supported the notorious Blunt Amendment –which would allow employers or insurers to deny women any health coverage they morally oppose — and sought to prevent insurers from using any federal funds to cover abortions in the Affordable Care Act. Brown has also voted to defund Planned Parenthood and voted against the Paycheck Fairness Act, in spite of his ad’s promise to “fight for” equal pay.

But hey, Scott is married to a lovely woman, and has two beautiful daughters.

"The liberal media said he's part of the right-wing war on women, and you can see he's not."

But he's not the only one...appearances can be quite telling, even on the national front. Raine wrote about this too, Mitt's utterly bizarre appearance on Univision. We've seen the pictures before, but it's worth checking out again: 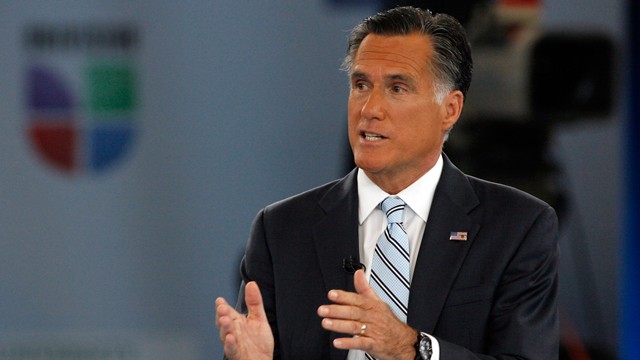 "The liberal media said he hates Hispanic immigrants, and you can see he doesn't."

Lastly...we'll leave you with the chair. You might have heard about about a gentleman in Austin, TX that is hanging an empty chair from a tree in front of his house. You could probably connect the dots. He himself has denied any racism.

KVUE says cameras rolled as homeowner Bud Johnson removed the rope and placed the chair on the lawn. He told the TV station those complaining about the display have the wrong idea:

"... It's a misconception," Johnson said. "It has nothing to do with racism. Nothing."

"When you put up a chair in your lawn with a rope around it, you're sending a very powerful message," said Linder. "It's also very insensitive. Black folks know what that means. It happens in the workplace for example. Nooses in the workplaces are unacceptable. It's no different in your yard. Even though it's private property, it goes beyond individual expression."

"The GOP Base is accused of being racist and hateful, and you can see they're not."