On June 2, 1995, an American was shot down over a war zone. While he wasn't captured, he spent over a week eluding the enemy at the time, and was rescued with much fanfare on June 9. At the time, he became a celebrity of sorts, and was celebrated and honoured by just about everyone. You may remember him as Captain Scott O'Grady.

A generation before him, we were fighting another war in another place. This time, it was lengthy and serious, and many thousands of Americans were held in place as Prisoners of War. Although some trickled out for medical reasons, and an ocassional escape, the bulk of them were released and came home after the Peace accords were signed in 1973. Some of them were in captivity for more than 5 years. Although we know of all the issues returning veterans of that conflict faced, perhaps the most famous homecoming photo of all came from this conflict. 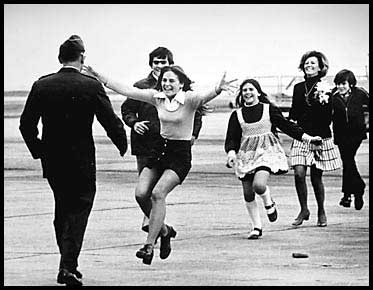 On June 30, 2009, an American soldier was captured in Afghanistan under somewhat mysterious circumstances. While there's much argument about it now, reports at the time were far more sympathetic to Sgt. Bergdahl.

Bergdahl went missing on the night of June 30, 2009, near the town of Yahya Kheyl in Paktika Province. Accounts of his capture differ. In a video, Bergdahl stated that he was captured when he fell behind on a patrol. Taliban sources allege he was ambushed after becoming drunk off base; U.S. military sources deny that claim, stating, "The Taliban are known for lying and what they are claiming [is] not true". A Department of Defense spokesperson said, "I'm glad to see he appears unharmed, but again, this is a Taliban propaganda video. They are exploiting the soldier in violation of international law." Other sources said Bergdahl walked off base after his shift or that he was grabbed from a latrine. According to an AP article from 2009, the U.S. Department of Defense attributed his disappearance to "walking off his base in eastern Afghanistan with three Afghan counterparts and was believed to have been taken prisoner".

Of course, we're all familiar with the story of recent days and how he came home. Not very long ago, he would have received a ticker-tape parade through the Canyon of Heroes, but in this atmosphere he can't even get a welcome home in his own hometown.

So what has changed?

It's difficult to put a finger on the "one thing" that changed everything, with perhaps one exception. January 20, 2009.

Since that very afternoon, opposition groups have been calling for open rebellion against the President, and a cry to "Take America Back". Back to what remains unclear. In the five years hence, there's been increasing rancor and division among these "united" states. I think I may be luckier than most, here in New England there is a geographically defined area and a shared history that still binds these 6 states together. But any 'kinship' I may feel to my neighbors in Connecticut or Vermont doesn't seem shared with my fellow Americans in say, Texas or Alabama.

Despite pledging the same allegiance, and saluting the same flag, we're not the same anymore. Oh, I have friends and even family in widely scattered places around this fair land. While I can pick my friends, and the few I have in "red" enclaves remain tied to reality, I distinctly avoid talking politics with my family from the same places; I'd rather not become enemies with them.

Looking at the landscape changing over the past 5 years, I see a lot of good. The United States doesn't go running around the world bullet-fucking every country we disagree with anymore. I have health insurance again, and "Obamacare" likely saved my life two Junes ago. I saw the jobs report yesterday and it was mentioned that all the job losses from the "Great Recession" have finally been made up. (So it's taken 5 years just to get back to where we started, but that's a blog for another day.) There have been great strides forward in equality and fairness and other things.

Why does this matter to me, but is seen as "GOVERNMENT TAKEOVER!!!" in other parts of the country? I suppose we'll never know.

A few years ago, I wrote this blog. I don't think my opinion has changed any; in fact, it's become stronger than ever that despite our best efforts, we're still headed the wrong way. Oh, it's not us. I simply cannot fathom why the "opposition" seems so hell-bent on widening the divisions, fostering hatred, and spreading sedition among the fringes of America.

It's very curious that yesterday was the 70th anniversary of the D-Day landings. Our country was born in war, and through its painful growth we shared tragedy, triumph, and made mutual sacrifices to reach common goals. I feel like that's all gone; if we were faced with a true world crisis like the one we faced 7 decades ago, could these United States even become United enough to persevere?
1 comments (Latest Comment: 06/07/2014 13:32:36 by BobR)
Perma Link