We Americans sure do love our wars! We've had glorious wars that were fought with brave soldiers to secure our future and the future of our human race. Like the American Revolution, World War I, WWII are just a few examples of wars that we called "Great" "Just" and even "Glorious".

Then there's those we prefer not to mention, like the Civil War, the hundreds of wars against native Americans, and the wars we lost like Vietnam. Most wars tend to be over land or oil; or oil in land, or slaves. Summed up as "brownish people not doing what we want them to do".

We invade ARQI because they invade a smaller country next door. We want to help this poor country. (Not really poor, per se; they have tons of oil). Our intention is to make the dictator of ARQI step down. We could just make him do it, since we put him there anyway, but that's not as much fun.

After a long hard fight, we walk away whimpering, but claiming victory because they left the little country alone. We issue financial sanctions against ARQI which is somewhat pointless since they have a LOT of money and oil and will only hurt the people and not those in power, but I digress.

Now it gets exciting! This is where the drama can really play out for us here at home (unless your family member is involved, then it's not so much Theater as it is Torture). We here in America elect the son of the President that invaded the first time to cook up a plan to invade again! Essentially giving his father the best Father's Day gift a son could give; albeit with many other fathers losing their sons and many sons losing their fathers, but lets not nit-pick, shall we?

From there your guide to strategically fucking up a region is easy if you take these simple steps:

1. Launch war with ARQI on trumped up reasons. Try not to giggle as you announce the bombing has started.


2. Be sure to broadcast our troops doing cool things like toppling statues as a symbol of our disgust of the oppressive regime. 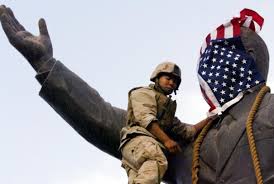 3. Try not to get involved in oppressive behavior yourself. 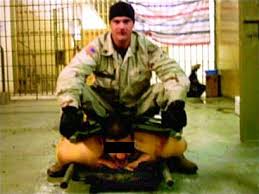 But when you do, blame it on a few bad apples and complain about having to go to war with the troops that the last President left you with because he was too busy getting BJ's to care about our troops.


4. Convince other countries that they should help you by sending a few troops to join. Sure, people will die, but this is war freedom.

5. Declare that the War is going swell, even though people might hear otherwise. Blame the media for being downers. 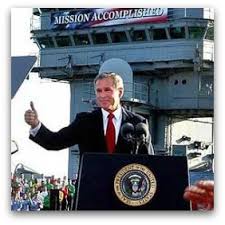 6. Keep the cheery face going; sound folksy yet in-charge when doing so:

In those regions where pockets of dead-enders are trying to reconstitute, Gen. Franks and his team are rooting them out. In short, the coalition is making good progress.Donald Rumsfeld [USA Today, 6/18/03]

7. Don't let those nay-sayers bring you down! So the troops don't have enough armor, so what if some people are suggesting that the reason for the war was a lie, don't listen to these voices! Instead, do something off the cuff and surprising.


8. Keep this up until the new guy gets in. Blame everything on him. Get your frienemies to also blame the new guy.


9. Continue to blame the new guy for pulling troops out while the country goes into a spiraling downfall because the new leader that you installed is kind of a dick. 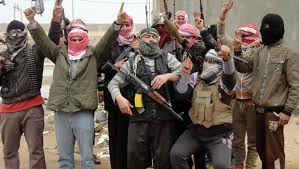 10. Don't worry that the country that you were ignoring, ARIN, is now building nukes.