So we know that your more likely to be stopped, searched, molested or even killed if you're black. It used to be DWB (Driving while Black) mostly in a car that looked suspect [read: expensive car]; but now you can just be walking down the street, sitting on a bench or driving a crappy car loaded with kids.

If Rosa Parks tried sitting in the front of the bus today, she'd be tased nearly to death.

I realize the police are in a tight spot, crime happens, and if it can be prevented that is always a better option than the crime being investigated after the fact.

But if a person is not doing anything wrong can we not just leave them alone? If they match a description of someone who may have committed a crime can we just ask them a few polite questions and (this is important) explain why we are stopping them. Perhaps this approach might actually get them to help! Wouldn't that be beneficial.

Woman with small kids gets pulled over at threat of gun point driving a car that didn't match the crime vehicle in any way except four tires:

And there's this which will really piss you off; crime of sitting on a bench:

I could go on. There is so much video out there that probably only represents a tiny, tiny portion of the activities that exist.

Meanwhile, on the Bundy Ranch standoff, white guys hold sniper rifles on Federal Agents trying to do their jobs and no one is getting a beat down. 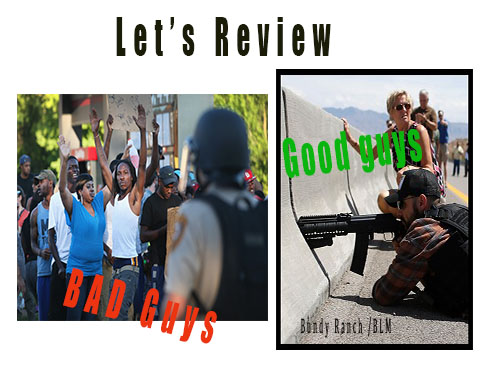 Don't tell me it's not hard to be black (or poor) in America. Or, that we have a black President so things are getting better. Our black President can't even wear a fucking tan suit and not get shit for it!
1 comments (Latest Comment: 09/01/2014 00:00:43 by Will in Chicago)
Perma Link