If you can’t speak out against this kind of thing, a crime that’s so unjust
Your eyes are filled with dead men’s dirt, your mind is filled with dust
Your arms and legs they must be in shackles and chains, and your blood
it must refuse to flow
For you let this human race fall down so God-awful low!

This song is just a reminder to remind your fellow man
That this kind of thing still lives today in that ghost-robed Ku Klux Klan
But if all of us folks that thinks alike, if we gave all we could give
We could make this great land of ours a greater place to live

The Death Of Emmett Till by Bob Dylan


Velveeta wrote a blog yesterday that I want to expand upon.

But Elizabeth [Lauten] is a white women so it's okay for her to say these things. Just like it's okay that white people riot over sporting events and pumpkin festivals and destroy property, including looting and burning businesses and police cars, but when Black people riot and loot because an unarmed teenager got shot that's just wrong. BAD Black people, BAD!

So, let's see, it's okay to riot over World Series wins and pumpkin festivals and okay to call black teenagers skanks and of course, to shoot black teens.

Here is what she said and later apologized for, in part:

“Stretch yourself,” she demanded of the Obama girls. “Rise to the occasion. Act like being in the White House matters to you. Dress like you deserve respect, not a spot at a bar. And certainly don’t make faces during televised, public events.”

Many were outraged, understandably. From the article:

I don’t know what’s worse here: treating teenagers who act like teenagers as though they've committed treason or implying that girls don’t deserve respect because of the length of their skirts. Way to uphold rape culture, Lauten. And why is she even discussing 13- and 16-year-old girls being at a bar anyway? They’re the Obama sisters, not the Bush twins.

Vel mentioned how good it is to be white. That is not something that makes a lot of white people comfortable hearing. But I can't deny the truth. I was born with a privilege that is hard to describe because I never knew it existed. I can't change this fact. I can however become as aware as possible to this reality.

Today, New York Magazine published an interview by Frank Rich with Chris Rock. This part stopped me in my tracks because race and race relations per say were described in a way that I had not seen it framed before.

What would you do in Ferguson that a standard reporter wouldn't?
I’d do a special on race, but I’d have no black people.

Well, that would be much more revealing.
Yes, that would be an event. Here’s the thing. When we talk about race relations in America or racial progress, it’s all nonsense. There are no race relations. White people were crazy. Now they’re not as crazy. To say that black people have made progress would be to say they deserve what happened to them before.

Right. It’s ridiculous.
So, to say Obama is progress is saying that he’s the first black person that is qualified to be president. That’s not black progress. That’s white progress. There’s been black people qualified to be president for hundreds of years. If you saw Tina Turner and Ike having a lovely breakfast over there, would you say their relationship’s improved? Some people would. But a smart person would go, “Oh, he stopped punching her in the face.” It’s not up to her. Ike and Tina Turner’s relationship has nothing to do with Tina Turner. Nothing. It just doesn’t. The question is, you know, my kids are smart, educated, beautiful, polite children. There have been smart, educated, beautiful, polite black children for hundreds of years. The advantage that my children have is that my children are encountering the nicest white people that America has ever produced. Let’s hope America keeps producing nicer white people.

People of non-color need to understand that the only race relations problem we really have in this country is that we shouldn't be the only ones to decide what progress is. That is a step forward in progress for our abysmal record with people of color in this nation and it's step forward to being nicer people. I don't think anyone is asking for perfection, but rather, just try to be better.

Right now, at this moment, the 14th Street Bridge going into Washington DC is closed to traffic. People are protesting not only Ferguson but police brutality and the inequality that we have seen in our nation. 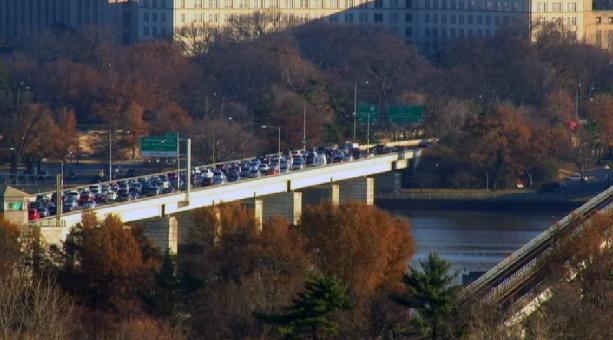 There are a lot of people all across this nation shaking their fingers at the people of Ferguson for being so angry. There are a lot of people who understand that anger. Maybe it is time we started listening to those who are angry instead of trying to tell them that they are wrong. I will end this blog with the words of a man we like to quote sometimes but too often don't heed:

Now let me relieve you a bit. I've been in the struggle a long time now, (applause) and I've conditioned myself to some things that are much more painful than discourteous people not allowing you to speak, so if they feel that they can discourage me, they'll be up here all night.

Now I wanted to say something about the fact that we have lived over these last two or three summers with agony and we have seen our cities going up in flames. And I would be the first to say that I am still committed to militant, powerful, massive, non­-violence as the most potent weapon in grappling with the problem from a direct action point of view. I'm absolutely convinced that a riot merely intensifies the fears of the white community while relieving the guilt. And I feel that we must always work with an effective, powerful weapon and method that brings about tangible results. But it is not enough for me to stand before you tonight and condemn riots. It would be morally irresponsible for me to do that without, at the same time, condemning the contingent, intolerable conditions that exist in our society. These conditions are the things that cause individuals to feel that they have no other alternative than to engage in violent rebellions to get attention. And I must say tonight that a riot is the language of the unheard. And what is it America has failed to hear? It has failed to hear that the plight of the negro poor has worsened over the last twelve or fifteen years. It has failed to hear that the promises of freedom and justice have not been met. And it has failed to hear that large segments of white society are more concerned about tranquility and the status quo than about justice and humanity.