Happy Mothers Day! I was going to write a post about a Mother, a famous one, but Mr. Donald J. Trump has not yet announced Sarah Palin to be his VP running mate and I want to stay relevant. Of course it's a forgone conclusion that he'll pick her to help him with the "woman vote". Not that he needs it.

Today, I'd like to introduce you to some of our soo-to-be first family. This week we will focus on his children, Donald Jr, Eric and little Baron. Oh, he also has two daughters, Ivanka and Tiffany, but they're not important.

Donald Jr, affectionately called "DJ" by his father, is President of the Trump Organization, which means he basically has a huge office to sit in where he trolls the internet, updates his twitter account by the minute and fires people. He also has 5 children by the model that he married whose name is Model Wife #1; but he doesn't have to worry about raising his offspring because he has people for that. Work at Trump International can be very stressful and time consuming so he takes great care in selecting the people that will raise his children, just as his father before him did.

Eric Trump, nicknamed "Stubby" is a Senior VP in the Trump Organization. He also runs the Trump Winery, the Trump Water Bottling Company, and the Trump Hairpiece Division. Like his father and older brother, he'll be needing that before he's 40.

Baron is the son of Model wife #3 and the current Mrs. Trump. Little Baron is blessed to look like his mother who's a beauty to be sure! He is raise by several nannies and seems to need new ones every week or so. Perhaps they just can't find a suitable fit for Barons exuberance.

As I've stated, working for Trump Organization can be quite stressful and the brothers Donald Jr and Eric love to relieve their stress by hunting animals. It's a very dangerous sport! They put their lives on the line every time that the cage from the animal pen is opened and the drugged animals are set loose. It is truly man vs beasts! With nothing between them other than the latest in gun technology, the boys must stand their ground, sometimes behind a waist high wall, to stare the animal down before before claiming their trophies. Whew! It's exciting just thinking about it!

Here's some harrowing pictures of them surviving this manly sport: 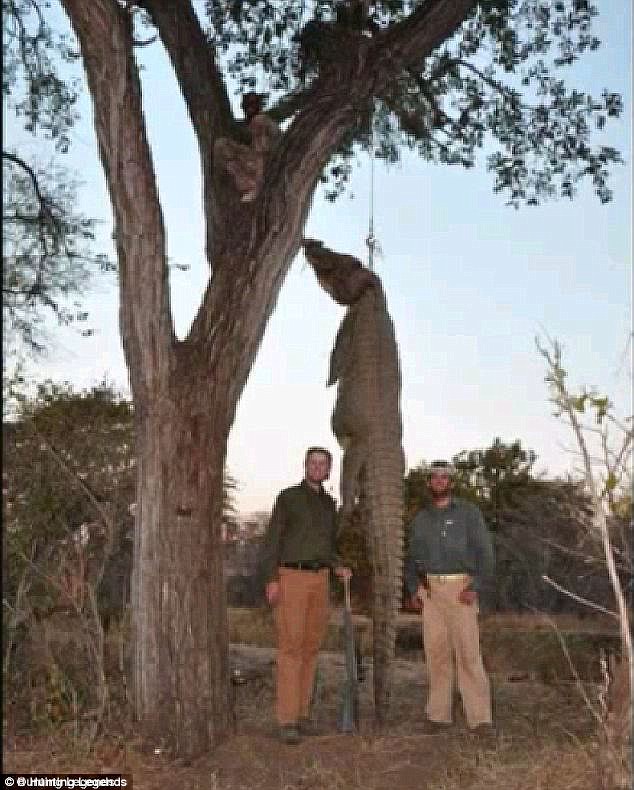 Killing an alligator with nothing but a shotgun!

Only 2 men against 1 vicious drugged animal!

Donald Jr. collects his trophy after downing one of the largest mammals on Earth, an elephant. Soon, we'll be rid of these large beasts.

I look forward to seeing this fine, upstanding family in the White House. I sometimes wonder if they'll have pets and what kind? The last two occupants have had dogs that got a lot of camera time and notice by the press. I'm thinking they should get little Baron a Chinchilla. They're cute.
0 comments
Perma Link