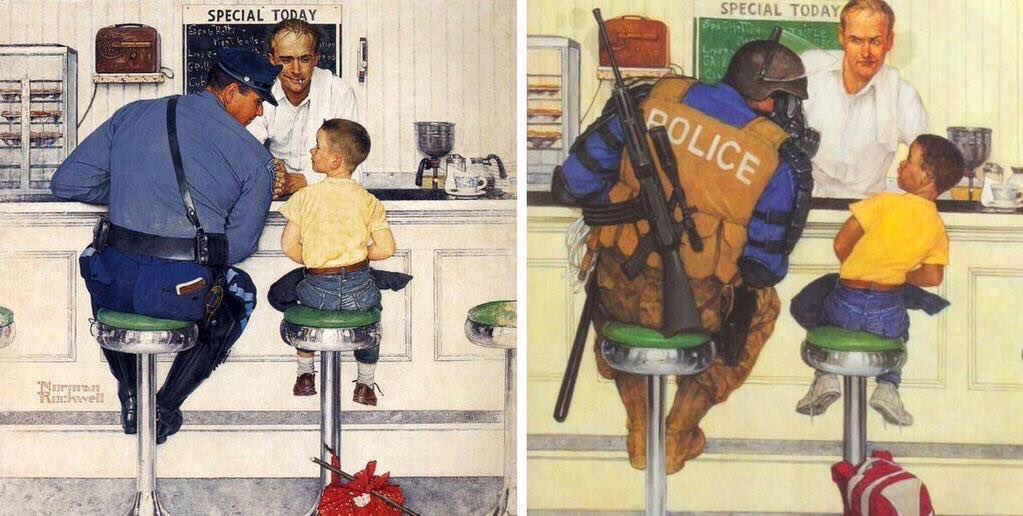 Norman Rockwell painted the original "Runaway" in 1958. Seen today as a wee bit of quaint Americana - it portrays what appears to be a Massachusetts State Trooper intervening with a young boy and his bindle stick on his way to places unknown, as a bemused short-order cook looks on.

My, how times have changed. We still have the Massachusetts State Police, but nowadays that name has all the connotations you think it would. While the "Staties" still patrol the Interstate highways and various state-owned properties in this Commonwealth - they are increasingly seen as the locals' meaner and more intimidating "Big Brother". I'd rather be pulled over by a Waltham Cop instead of a Statie any day of the week.

Over the years, there has been increasing militarization of what should be a civilian police force. Like all slippery slopes, it started innocently enough. The police recognized that they couldn't handle all situations, so SWAT (Special Weapons and Tactics) teams were established. Ordinary rifles and pistols were no longer enough, so now local forces have assault rifles and tactical semi-automatic pistols. Body armor - shields, "area denial weapons", and of course surplus military vehicles to carry it all.

People getting shot by the police used to be an exception - but like all gun violence in the United States, it has become the 'new normal'. For the most part, we read about another "officer-involved shooting" and simply shrug and move on to the next news item.

We're probably well past the point where we can ever walk that back, and like most issues that are near and dear to "our" side, we have completely missed the messaging. "De-fund" the police is as much of a dog-whistle to the other side as "Global Warming" and "Gay Marriage" were when those issues were the headlines.

But what can really be done? Let's think of a couple of real-world examples and see who might be showing up when you call 911.

Say I'm driving down Main Street, and I get into an accident. It's bad enough that the vehicles have become disabled, and are a hazard to everyone else. So we call for help, and who shows up?

Staying with traffic, say I then get a new car, and I'm out joyriding and not paying attention, I run a red light. Well, I get pulled over by who?

So now I'm sitting at home all sad, and my next-door neighbors decide to play some loud music late into the night. I want to sleep now, so I call in a noise complaint. Of course who shows up?

These are simple acts - but in all of these scenarios, you can easily find examples where the uniformed men with guns showed up to "help" and the situation wound up escalating to the point where somebody got shot.

"Defunding" the police is a cop-out. (no pun intended.) We're not advocating de-funding anyone. What I would advocate is shifting those funds into a kind of civilian services organization that can be tasked with traffic enforcement, accident assistance, noise complaints, and all manner of things where your only option is to call the police so they can send a man with a gun.

Of course the police will still exist. Criminal complaints, investigation, enforcement, protection...we're still going to need all of those things.

My thoughts today barely scratch the surface - like everything else in these United States, its going to be a long, complex process to 'fix' something that not everybody perceives as a problem. It is like a snake though - as every country boy knows, if you want to kill a snake, you need to cut off its head, not the tail. Any reforms attempted at the local level aren't really going to have much teeth. Police Chiefs, Mayors, Governors, and indeed - even the President - need to make the reforms stick.

Change does begin at the top, after all.