Since the most important news all week has been the ongoing saga of the flaccidity of Tom Brady's Balls, there's been a couple of things that may have slipped through the cracks. Individually, these two stories make you go "Huh, that's interesting."

But put them together, and you'll be reaching for your foilhat.


First, we've got the story that our friends at the Bulletin of Atomic Scientists have moved the doomsday clock from five minutes to three minutes before midnightt...allegedly because of climate change.

"Today, unchecked climate change and a nuclear arms race resulting from modernization of huge arsenals pose extraordinary and undeniable threats to the continued existence of humanity. And world leaders have failed to act with the speed or on the scale required to protect citizens from potential catastrophe," said Kennette Benedict, executive director of the Bulletin of the Atomic Scientists, in a news release. "These failures of leadership endanger every person on Earth."

The Bulletin's Science and Security Board looks at global issues on a regular basis and decides whether to move the minute hand of the clock, with particular stress on the status of nuclear arms and reaction to climate issues.

In recent years, the clock has moved the wrong direction for humanity. After standing at 17 minutes to midnight in 1991 -- the furthest it's ever been from the end of the world -- it's gotten closer each time it's been changed since, with the exception of 2010, when it was pushed back by one minute to 11:54 p.m.

The scientists expressed disappointment at the latest developments.

But then, I ran across this story while skimming the intertubes this morning. Yeah, something like that would really change the climate, wouldn't it? I'm telling ya, somebody knows something!

NASA has warned skywatchers that a huge asteroid will pass over European and North American skies on Monday and that this will be the biggest space rock to do a fly-by of our planet until 2027.

Most asteroids that pass us are smallish, between 50 and 100 meters wide. This latest visitor, asteroid 2004 BL86, is half a kilometer (0.3 miles) across, which would be very damaging if it hit Earth.

Thankfully, there's no danger of that. The closest it will get is 1.2 million km (745,000 miles), or about three times the distance between our planet and the Moon.

"Monday, January 26 will be the closest asteroid 2004 BL86 will get to Earth for at least the next 200 years," said Don Yeomans, manager of NASA's Near Earth Object Program Office at the Jet Propulsion Laboratory. "And while it poses no threat to Earth for the foreseeable future, it's a relatively close approach by a relatively large asteroid, so it provides us a unique opportunity to observe and learn more."

The asteroid will be brightest at around 8pm EST (1am Tuesday UTC) in skies over Europe and North America. It won't be visible to the naked eye – ideally you should use a three or four-inch telescope.

"I may grab my favorite binoculars and give it a shot myself. Asteroids are something special," said Yeomans, who is retiring from the JPL after 16 years on the job. "Not only did asteroids provide Earth with the building blocks of life and much of its water, but in the future, they will become valuable resources for mineral ores and other vital natural resources. They will also become the fueling stops for humanity as we continue to explore our solar system. There is something about asteroids that makes me want to look up." 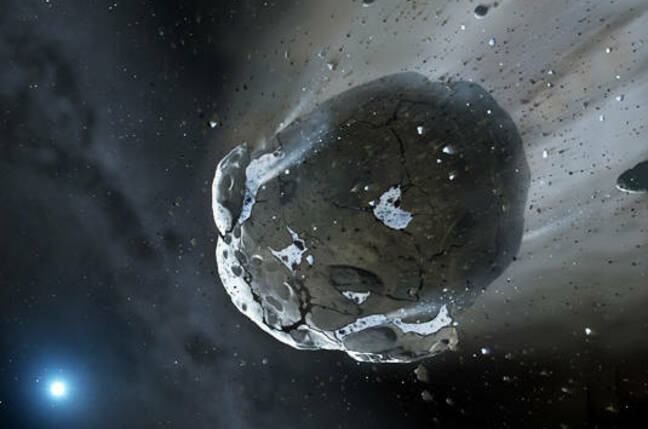 Tin foil or not, this is really interesting!