You remember that song, right? It was sung by a band called Barenaked Ladies. according to the songs wiki page:

It was first conceived as a simple improvised song while Page and Robertson were counsellors at a summer music camp. On the way home from camp, Robertson played the tune for the campers, randomly listing amusing things he would buy with a million dollars.

So that brings me to the last GOP infomercial, also known as a GOP debate. Mitt Romney took offense at his original support for the individual mandate being pointed out. When confronted by Rick Perry, Romney put out his hand, and asked for a ten thousand dollar bet.

If nothing else is clear after this stunt, it is this: Mitt Romeny clearly doesn't understand the pain that many Americans are going through. You and I might make a silly bet -- so it is true that this does happen. That said -- you and I are not running to be President of the United States. We are not running to be the Executive office and we are not running to be the leader of the free world.... $10,000 is about 3 months pay for many Americans. It's not something to flippantly bet about-- even if it appears to be in good fun. Romney is a multimillionaire that makes that amount of money over and over again -- he doesn't go to bed hungry. He doesn't live paycheck to paycheck. His family has a roof or 2 or 3 over their heads. For some people in our nation - for many actually - ten thousand dollars is like having a million dollars. For many in our country eating a box of Kraft macaroni & cheese is extravagant. A green dress would be a welcome relief. A K-car is something to live in, as opposed to a nice reliable car. Furniture? Aaron's rental re-possessed it. That house? foreclosed on.

Funny thing - Perry was actually incorrect in his accusation, according to Politifact and other fact checking sources. From the NYT:

Mr Perry had claimed, as he has before, that in early drafts of a book, Mr. Romney had proposed that the Massachusetts health-care program should be a model for a national plan. Several news organizations, including PolitiFact.com, a nonpartisan fact-checking group, have called this claim inaccurate.

“I’ve made million dollar bets with my friends, and I think the reason that Mitt made that wager is because he knew that Rick Perry wouldn’t take it,” said Eric Fehrnstrom, a senior advisor to the Romney campaign. “And he was right.”

I have to ask this even more important question, faced with a non-truth, is THIS how Romney will react as President? Making a bet? Is this how he will react when accused of being a non-christian Mormon?

Good thing no one accused him of being a socialist Kenyan-born Muslim. I wonder what he would wager on with regards to that.

I'll be scarce today again, friends -- I have 10 Gazillion Billion dollars to spend.... 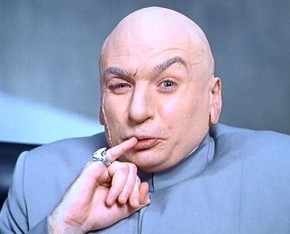