It's just one week to go; is all your shopping done?

In between trips to the mall, if you have any time at all, perhaps you still watch one or two of the annual programs that appear at this time of year. I'm sure that like Christmas music, we all have our favorites, and some others that make us run screaming from the room looking for eye-bleach.

I've watched many, and although I no longer hunt through the TV dial for them, my collection of video distills down to what I consider the Big Four - "The Grinch", "Santa Claus is Coming to Town", "A Charlie Brown Christmas"....and this guy: 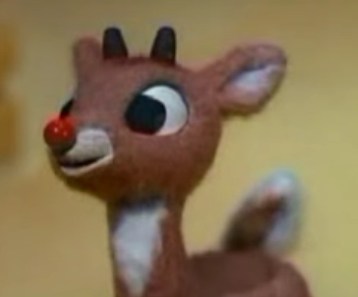 I would eventually like to expand to a Big Five. Although the special itself isn't that good, the appearance of the iconic "Misers" has made 'Year Without a Santa Claus' a must-have for quite some time.

A few years back now, I sat through Rudolph with a notebook and took some detailed notes (for reasons still unclear to me.) So now, for your holiday pleasure, I present "The Rudolph Test":

Everyone has seen this beloved holiday special countless times, but were you really paying attention??

What is the full title of the tale?

What is the Abominable’s full name?

What is the prospector’s full name and title?

Who is Rudolph’s ‘buddy’?

Who is Rudolph’s Father?

What is the narrator’s name?

Who is the coach?

Who is Rudolph’s girlfriend?

Who is the dentist elf?

During the song ‘Silver and Gold’, what do the squirrels do with the gold?

Who set out to search for Rudolph?

When did Yukon declare ‘Land Ho!’?

Why wasn’t Herbie at elf practice?

When Rudolph and Herbie declared their independence, what happened?

Who is the Official Sentry of The Island of Misfit Toys?

Who is the Ruler of the island?

Where did Rudolph find the missing search party?

When did the storm hit?

How was the Abominable defeated?

What is the Abominable’s one weakness?

What else does the Abominable do?

What does the Abominable do after he is reformed?

Name as many toys as you can from the Island of Misfit Toys.

BONUS: Name everything Sam is wearing.

ESSAYS: Do ONE
Describe the entire story
Tell what you think is wrong with the doll on The Island of Misfit Toys.
Explain how Santa gains so much weight so fast.
Tell what happens to the bird that can’t fly after he gets thrown off the sleigh without an umbrella.