Vestigial Organs. We've all got 'em.

I won't delve too deeply into the philosophy of design vs. evolution, but if there is such an all-perfect, all-knowing being out there who "when it comes to the matter of deciding a thing...simply says "Be" and it is", it does make you wonder about some of the blind alleys the body has led down.

It's rather quite fascinating. Skipping the obvious one for a minute, ever wonder about your vomeronasal organ?

In some animals the vomeronasal organ (VNO) is part of a second, completely separate sense of smell, known as the accessory olfactory system. Many studies have been performed to find if there is an actual presence of a VNO in adult human beings. Trotier et al. estimated that around 92% of their subjects that had no septal surgery had at least one intact VNO. Kjaer and Fisher Hansen, on the other hand, stated that the VNO structure disappeared during fetal development as it does for some primates. However, Smith and Bhatnagar (2000) asserted that Kjaer and Fisher Hansen simply missed the structure in older fetuses. Won (2000) found evidence of a VNO in 13 of his 22 cadavers (59.1%) and in 22 of his 78 living patients (28.2%).

Given these findings, some scientists have argued that there is a VNO in adult human beings. However, most investigators have sought to identify the opening of the vomeronasal organ in humans, rather than identify the tubular epithelial structure itself. Thus it has been argued that such studies, employing macroscopic observational methods, have sometimes missed or even misidentified the vomeronasal organ.

There's a lot of musculature out there that's considered vestigial. Incredibly, it makes a difference what race you are on whether or not you have some of these things. We've been getting along just fine without them, I'd guess, but I wonder what those extra muscles do? Take a look at one of those handy arms attached to you.

The palmaris longus muscle is seen as a small tendon between the flexor carpi radialis and the flexor carpi ulnaris, although it is not always present. The muscle is absent in about 14% of the population, however this varies greatly with ethnicity. One study has shown the prevalence of palmaris longus agenesis in 500 Indian patients to be 17.2% (8% bilateral and 9.2% unilateral). The palmaris is a popular source of tendon material for grafts and this has prompted studies which have shown the absence of the palmaris does not have any appreciable effect on grip strength.

The levator claviculae muscle in the posterior triangle of the neck is a supernumerary muscle present in only 2–3% of all people but nearly always present in most mammalian species, including gibbons and orangutans.

One last one to check out, and this one is easy to find too. Right now, reach up to your ear. Feel along the upper rim. Notice that little bump on the inside, near the top corner? (You may not - only about 10% of the population has it.) That's called the Darwin's Tubercule.

Darwin's tubercle is a congenital ear condition which often presents as a thickening on the helix at the junction of the upper and middle thirds. The feature is present in approximately 10.4% of the population. This acuminate nodule represents the point of the mammalian ear.

This atavistic feature is so called because its description was first published by Charles Darwin in the opening pages of The Descent of Man, as evidence of a vestigial feature indicating common ancestry among primates. However, Darwin himself named it the Woolnerian tip, after Thomas Woolner, a British sculptor who had depicted it in one of his sculptures and had first theorised that it was an atavistic feature.

All of this at last leads me to my new favorite useless organ, the mysterious appendix. Take a look at this picture: 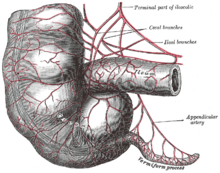 Your partially-digested food comes in the tube on the right, and is supposed to head upwards for the length of the large intestine, or colon. The dead-end below is called the "cecum".

Well, I don't have one of these anymore. I told everyone what's up; that mass that was removed was in the cecum, and eventually grew large enough to block off the appendix. It was my useless, vestigial organ that eventually 'flared' and caused the abdominal pain that made me seek relief. Without it....if any of the over-the-counter remedies had worked, and the pain had subsided. I likely would have written it off and I still wouldn't know that there was anything else wrong in there.

Maybe until it was too late.

So perhaps there is a use after all for some of these vestigial organs.....maybe going all the way back to my initial statement about design vs. evolve. Maybe somebody out there knows what he's doing after all. Or maybe I'm the luckiest man in America this week; I just don't know.