Last night Mitt Romney gave an interview to Univision TV in Miami before a rally at Miami University. The Miami Herald has a small photo gallery along with the article. Here is a sampling:


Let us look a little closer:


I decided to check other photo sources,and got this, via Huffpo (many are AFP/Getty images): Mitt Romney is greeted by Maria Elena Salinas as he arrives for the Univision 'Meet the Candidates' Forum moderated by Jorge Ramos and Maria Elena Salinas, at the Bank United Field House at the University of Miami, on September 19, 2012 in Miami, Florida. Romney continues to campaign for votes around the country. (Photo by Joe Raedle/Getty Images)
Here is a picture of him arriving with his son.
This is him at the rally itself.

That's one piece about me that you may not know. The other is just about my heritage—my dad, you probably know, was the governor of Michigan and was the head of a car company, but he was born in Mexico. And had he been born of Mexican parents I'd have a better shot at winning this, but he was [audience laughs] unfortunately born of Americans living in Mexico. They'd lived there for a number of years, and, uh, I mean I say that jokingly, but it'd be helpful if they'd been Latino…

Here is Mitt From his hastily arranged press conference after news of his leaked fundraiser tape came out: 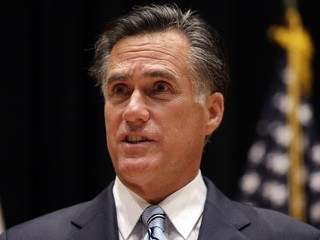 And here he is at his RNC Convention:

I think that Mitt needs -- in a very desperate way -- a new makeup artist for his appearances with a television audience, in Miami -- and I am going to leave it at that.

Here is a snippet from CBS:

I ask you, is it me, or does he look terribly orange/brown?