Today is our 42349th day in Afghanistan.

We'll start this morning as we always do; with the latest casualty figures from our ongoing war, courtesy of Antiwar.com:

We find this morning's Cost of War passing through:

If you haven't visited the actual cost of war link in a while, I recommend that you do so today. They've revamped the website over Labor Day weekend, and there is far more information and some new features worth your time to check out.


I've been saving this story for a while...I found it interesting, but thought it hardly qualified for Ask a Vet. Nevertheless....since we've just had our "last weekend of summer" rite of passage, perhaps you spent some time traveling about. Maybe you even visited a Museum Ship.

It's easy for us on the coasts, or with access to a river, to overlook the importance of our maritime history. Nevertheless, if there is a ship local to you, it's usually worth it to visit. Interpretive programs are one thing, but for ships of more recent vintage, you can often find actual veterans leading tours and sharing their memories.

There is one ship none of us is ever going to visit, though. It's the USS Pueblo. Sure you know of it, since she tangled with the North Koreans and lost.

The treatment of the crew was universally bad. Several staged propaganda photographs have since become famous; perhaps you're familiar with at least one of them? 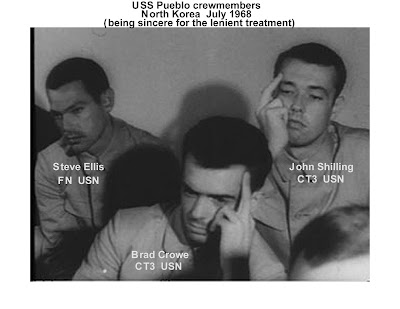 It took some doing, but extensive negotiations were carried out at the Korean War negotiation site at Panmunjon; some eleven months after the ship was captured, the men walked across the "bridge of no return" to South Korea and went home.

Over the years, the United States has tried and failed to secure the release of the ship; which sat for decades rusting away. I'm sure that the North Koreans and their Soviet masters picked the hull clean of anything useful, but unlike some incidents were Soviet aircraft were the inadvertent casualty of a defection, they never offered to return the ship to us.

But earlier this year, the ship went on display in Pyongyang.

PYONGYANG, NORTH KOREA — If there was ever any doubt about what happened to the only U.S. Navy ship that is being held by a foreign government, North Korea has cleared it up. It’s in Pyongyang. And it looks like it’s here to stay.

With a fresh coat of paint and a new home along the Pothong River, the USS Pueblo, a spy ship seized off North Korea’s east coast in the late 1960s, is expected to be unveiled this week as the centerpiece of a renovated war museum to commemorate what North Korea calls “Victory Day,” the 60th anniversary this Saturday of the signing of the armistice that ended hostilities in the Korean War.

The ship is North Korea’s greatest Cold War prize. Its government hopes the Pueblo will serve as a potent symbol of how the country has stood up to the great power of the United States, once in an all-out ground war and now with its push to develop the nuclear weapons and sophisticated missiles it needs to threaten the U.S. mainland.

Many of the crew who served on the vessel, then spent 11 months in captivity in North Korea, want to bring the Pueblo home. Throughout its history, they argue, the Navy’s motto has been “don’t give up the ship.” The Pueblo, in fact, is still listed as a commissioned Navy vessel, the only one being held by a foreign nation.

But with relations generally fluctuating in a narrow band between bad to dangerously bad, the United States has made little effort to get it back. At times, outsiders weren’t even sure where North Korea was keeping the ship or what it planned to do with it.

Requests for interviews with the captain of one of the North Korean ships involved in the attack were denied, and officials here have been tight-lipped about their plans before the formal unveiling.

The Pueblo incident is a painful reminder of miscalculation and confusion, as well as the unresolved hostilities that continue to keep the two countries in what seems to be a permanent state of distrust and preparation for another clash, despite the truce that ended the 1950-1953 war.