Well they are at it again, Yesterday the house voted to cut the Supplemental Nutrition Assistance Program (SNAP) by nearly 40 Billion dollars.

Cantor said the deep cuts enacted Thursday were necessary because while most SNAP recipients need the assistance, there are too many people “that choose to abuse the system.”

"Frankly it’s wrong for hard-working middle-class Americans to pay for that," Cantor said.

Rep. Tim Huelskamp (R-Kan.), a strong supporter of the bill, said that stiffer work requirements for certain adults applying for SNAP funds mean "you can no longer sit on your couch…and expect the federal taxpayer to feed you."

Republicans are somewhat misrepresenting fraud in the SNAP system. There have been problems but those problems do not warrant a 40 billion dollar gouging. They are lying:

FACT: In 2010 according to the U.S. Department of Agriculture, which administers the program, 30% of households enrolled in SNAP do work. Of all SNAP households in the United States, 49% include children, 16% include seniors and 20% include someone disabled. All together, 76% of SNAP households contain a child, a senior or a disabled person.

Myth #2: SNAP is a drain on taxpayers.

FACT: Every $1 in SNAP benefits generates $1.73 in economic activity, according to Moody's economist Mark Zandi. SNAP not only helps low-income people buy groceries, it frees up cash for other expenses, such as medical care, clothing, home repairs and childcare. That benefits local businesses and their employees, which boosts the economy as a whole.

Myth #3: SNAP is rife with fraud and abuse.

FACT: “SNAP has one of the most rigorous quality control systems of any public benefit program,” according to the Center on Budget and Policy Priorities. SNAP fraud has actually been cut by three-quarters over the past 15 years, and the program’s error rate is at an all-time low of less than 3 percent. The introduction of EBT (Electronic Benefit Transfer) cards has dramatically reduced consumer fraud. According to the USDA, the small amount of fraud that continues is usually on the part of retailers, not consumers.

the Fraud meme is another Republican lie. They don't want people to know things like this: 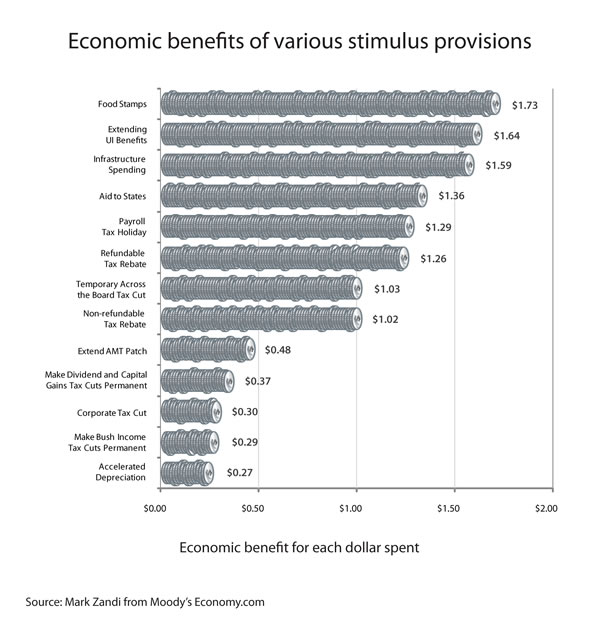 There are a few things you should know about the politics of food stamps—and that no House GOP member will tell you. First, the only time food-stamp usage fell in recent memory was under a Democrat. Second, food stamps, by design, rose massively during a period of economic expansion presided over by a Republican president. Third, even as the debate heats up, the number of people receiving the benefit has started to fall. It’s hard to see turning points in real time, but it’s quite likely we have already hit peak food stamps in this country.

Go look at the annual data. During the presidency of Bill Clinton, as the economy expanded and wages rose, the number of people on food stamps fell for six straight years, from 27.47 million in 1994 to 17.318 million in 2001—a decline of 37 percent.

But then things changed starting. As The Wall Street Journal noted, “The food-stamp boom began with the George W. Bush Republicans, who expanded benefits in the appalling 2002 farm bill.” With the complicity of Democrats and Republicans in Congress, Bush presided over a massive expansion of the program. The 2002 farm bill expanded eligibility to certain non-citizens, and the 2008 farm bill, passed over Bush’s veto, added more benefits. The upshot: between 2001 and 2009, the number of people on food stamps rose from 17.318 million to 33.49 million, an increase of 93.4 percent. The total annual costs of the program tripled between 2001 and 2009, from $17.8 billion to $53.6 billion. It may turn out that George W. Bush was the most effective food-stamp president.

As the Center on Budget and Policies Priorities explains it:

SNAP Is Not Contributing to the Nation’s Long-term Fiscal Problems
While SNAP spending has risen considerably since the recession hit, the increases are expected to be temporary. CBO predicts that SNAP enrollment will fall in coming years as the economy recovers. CBO projects that the number of people receiving SNAP in a typical month will begin to fall in 2014 (from 47.7 million in fiscal year 2013 to 47.6 million in 2014, 46.5 million in 2015, and 34.3 million by 2023.)[5] By 2019, SNAP spending will return to 1995 recession levels as a share of GDP. (See Figure 3.)

Once the economy has fully recovered, SNAP costs are expected to rise only in response to growth in the size of the low-income population and increases in food prices. Unlike health care programs and Social Security, there are no demographic or programmatic pressures that will cause SNAP costs to grow faster than the overall economy. Thus, SNAP is not contributing to the nation’s long-term fiscal problems.

It seems incredibly cruel to cut the budget on the backs of the most vulnerable people in this nation.

The first reinstates restrictions on many able-bodied, childless adults aged 18 to 50 who receive SNAP benefits. It accounts for roughly half the cuts. Under those limits, 1.7 million people would lose benefits next year, the nonpartisan Congressional Budget Office reported on Monday. Under federal law, those able-bodied adults may collect only limited benefits — up to three months over a three-year period — unless they work more than 20 hours per week or are in a job-training program.

Job training program you say? The GOP rejected that last year. But, according to Eric Cantor, millions Americans are laying on their couch and don't deserve their food stamps because they are laying on their couches and not working. Why aren't they working? They aren't working because the economy is still lagging along and the GOP has done nothing to stimulate the economy. Why is that?

Today the House plans on voting to defund Obamacare in order to stop stop a government shutdown --again. You know, why?

Maybe the President should come out and say he's against Obamacare.... and that he hates poor people. Then maybe these cruel and sadistic 'representatives' would actually do something that helps instead of hurts our nation.