I am left with very little to write that hasn't already been said by people much smarter than me. We have a dead young man who is being blamed for his own death.

Sadly, and heartbreakingly, just as Michael Brown is being blamed for his own death, the very people in government who refuse to do anything - the House of Representatives, to be quite specific - are blaming the President for the ills of the country.

Those who have been in power for so long are seeing that power slip away, and in response the are putting a death grip - both literally and figuratively - on maintaining that power, regardless of the carnage it causes.

I would say that the events in Ferguson will not end well, however that appears self evident. The question is now, for myself is not if it will end, but rather: where and how?

6 days ago in NYC Times Square: 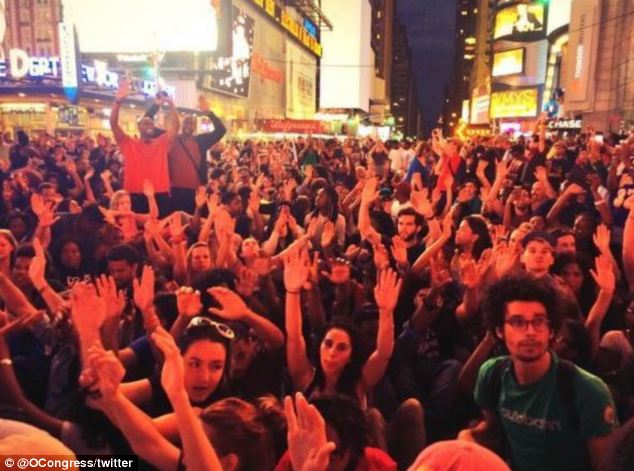 To the west coast. We are going through a transition in this country as the Old White Men are seeing that they will be losing the reins to an upcoming multi-cultural rainbow of young people, and they are angry and scared. They know they will be a minority, and it terrifies them, because they don't want to be the ones to have to obey those they have oppressed.

So in response they are flexing their power, and damn the consequences. We as a country and as individuals will suffer. This young man did not deserve to die. Neither have the countless before him, and those yet to come until the powers-that-be have relinquished their grip. That moment cannot come too soon.
26 comments (Latest Comment: 08/21/2014 20:12:48 by Mondobubba)
Perma Link