Good Morning, and happy Boxing Day out there!

I'll be boxing myself soon enough. Today is the first day of return and gift card season at the store, and we're expecting that to be much busier than the runup to Christmas. We'll see.

I want you to think about the Four Freedoms we all know and love today, particularly how they may relate to the current raft of Presidential Candidates. I won't necessarily enumerate them, but Norman Rockwell happened to paint a pretty compelling series of paintings during WWII illustrating the concepts. 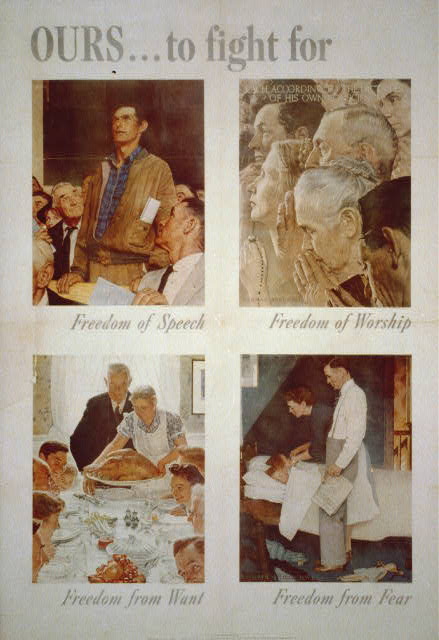 None of these things are codified in any of our legal documents, but nevertheless could you name any one of the candidates from any party that might be a supporter of these things? I know I can name several that are the complete opposite of these freedoms, but I won't be going there today.

It's been a long time since anyone ran a positive campaign for any office. Even my last local elections fell into name-calling and lies among the mayoral candidates. But of course, we all voted to send all the incumbents back, so I guess we as Americans don't care about that sort of thing.

Politics has become bombast; the loudest, most obnoxious, most outrageous candidate garners all the headlines, while the more intellectual, thoughtful, and reserved candidates generally get nothing. It's really not a road we should be headed down, but this seems to have become inevitable in recent years.

There's four more freedoms that have been enumerated out there, but it's from an almost obscure source that few people know of them. We should all know Duke Ellington.

Later in his life, Duke composed and performed a series of concerts that he dubbed "Concerts of Sacred Music." When Boston used to have a jazz station, one of the local hosts would broadcast the concerts in order on an evening before Christmas. (usually the 23rd). The second of these concerts features a piece called "It's Freedom", and in a lengthy soliloquy, Duke himself enumerates the life philosophy of his writing and arranging partner Billy Strayhorn:

In many ways, I find these four freedoms to be more compelling than the four we already know and love.