It's hard to believe that the State of the Union address was a mere four days ago. President Lincoln called it; "the world will little note nor long remember what [he] said there."

But there is one takeaway from the address - something that has bothered me for years about the Trumpian Cabal. As a student of history, with a focus on WWII, the term "America First" has always rubbed me the wrong way. 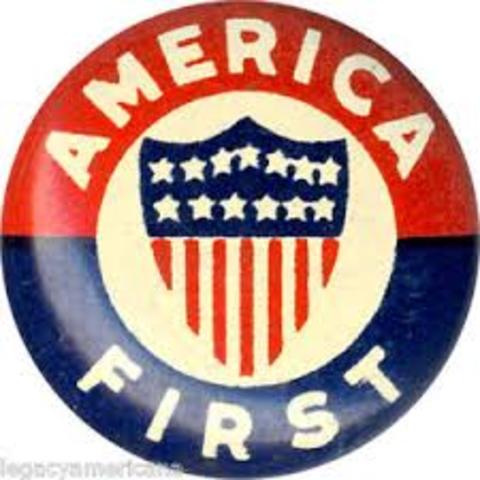 This is the "America First Committee". It was a pre-WWII group that actually fought to keep us out of the war. At first glance, it didn't sound too unreasonable.

The United States must build an impregnable defense for America.

No foreign power, nor group of powers, can successfully attack a prepared America.

American democracy can be preserved only by keeping out of the European war.

Except....the group was anti-semitic. Many famed persons actually joined and lent weight to their arguments, including the famed aviator Charles Lindbergh. Behind the weight of such celebrity, the group grew among college campuses, and Lindbergh himself was able to address a rally of 30,000 in Los Angeles in August 1941.

He went on to deliver an even more fiery speech in Des Moines in September:

It is not difficult to understand why Jewish people desire the overthrow of Nazi Germany. The persecution they suffered in Germany would be sufficient to make bitter enemies of any race. No person with a sense of the dignity of mankind can condone the persecution the Jewish race suffered in Germany. But no person of honesty and vision can look on their pro-war policy here today without seeing the dangers involved in such a policy, both for us and for them.

Instead of agitating for war the Jewish groups in this country should be opposing it in every possible way, for they will be among the first to feel its consequences. Tolerance is a virtue that depends upon peace and strength. History shows that it cannot survive war and devastation. A few farsighted Jewish people realize this and stand opposed to intervention. But the majority still do not. Their greatest danger to this country lies in their large ownership and influence in our motion pictures, our press, our radio, and our government.

Our principles were right. Had they been followed, war could have been avoided. No good purpose can now be served by considering what might have been, had our objectives been attained.

We are at war. Today, though there may be many important subsidiary considerations, the primary objective is not difficult to state. It can be completely defined in one word: Victory.

I'm not sure that the America First trajectory of 2018 will follow the same path as 1940. But the world situation is similar; I'm sure you could substitute "North Korea", "Muslim", and "Immigrant" wherever proper and could make a reasonable facsimile of a current speech.

What's more disturbing though, is that despite 77 years of progress is how thinly-buried the hate, fear, and xenophobia remains among these United States.

It's easy for us in the bluer areas to look at each other and say "We're better than this", but it appears we are increasingly in the minority.