George H.W. Bush was eulogized and memorialized yesterday in an official service in DC yesterday. Being a former president and WWII vet, it was expected that former and current presidents would attend. Jimmy Carter, Bill & Hillary Clinton, and the Obamas all were there, as was Dubya (of course). Unlike Barbara Bush's funeral, pResident tRump was not excluded. He was, however, precluded from speaking, for any number of obvious reasons.

He arrived a bit late, although that could be for security precautions, being the current pres... er... occupant of the White House. He was seated at the end of the row, with Melania between him and Barack Obama, who apparently acted as a buffer for the rest of those down the aisle. He didn't seem to be too happy to be there: 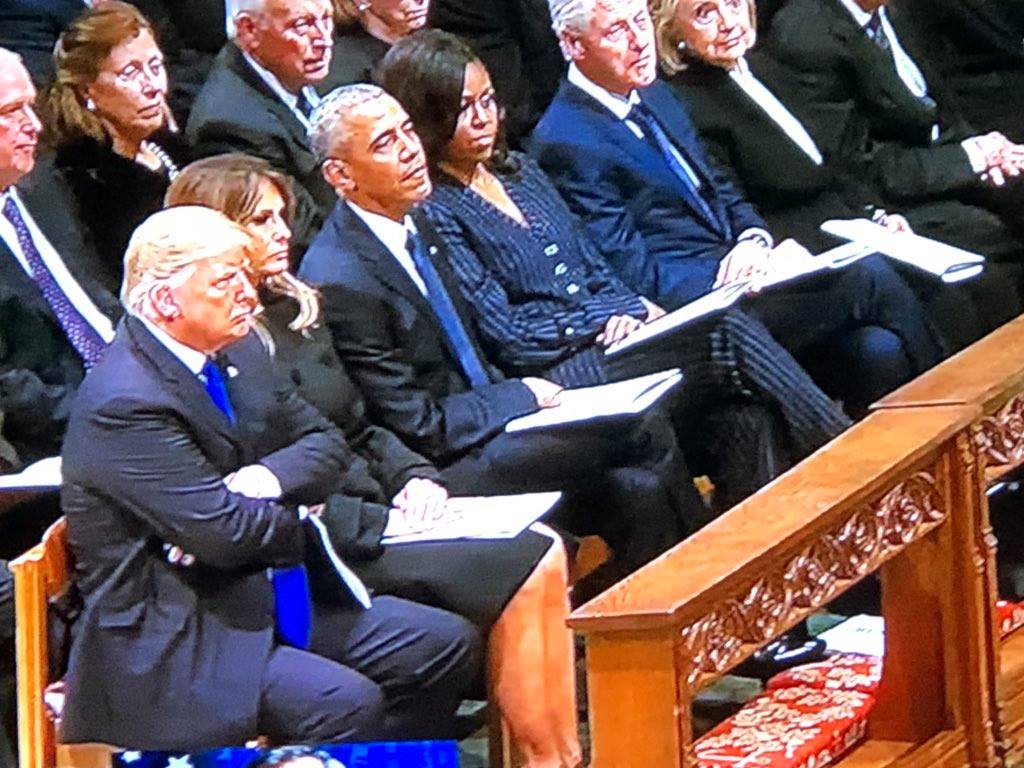 Of course, the funeral was not about him, and he wasn't the center of attention, everyone was showing love and respect for someone else and he had to just sit there and listen to it. His posture is classic defensive/impatient/angry, and has been described as looking like he's sitting on a toilet. THAT's an image I'd rather not have in my head.

As the service went on, the attendees recited a prayer known as the "Apostles' Creed". The words were printed in the program. Guess who didn't participate?

This is your "Christian" evangelical president. pic.twitter.com/u0478FoSyR

Keep in mind THIS is the guy the evangelical community holds up as The Chosen One for themselves, practically deifying him. This is how he shows his "Christian" side.

At another part of ceremony (not sure what was going on - National Anthem perhaps?), we see tRumpy once again showing his patriotism:

While all of this may seem petty and lacking context, the larger picture still holds - tRump can't be bothered with any of the normal roles and responsibilities that his job demands, if it doesn't inflate him in some way. His insatiable ego demands he not waste time doing for others and showing respect to others, since that takes away time for placing the focus on himself.

Some people are praising his actions at the funeral because apparently they think he didn't cause a scene. In reality - he did, in his own selfish petulant way. He fell far short of his predecessors sitting in the same pew. He's a disgrace to the office, a disgrace to the country, and a disgrace on humanity itself.