As the original Occupy Wall Street protest passes through its 6th week, the ideals and actions have spread throughout the country and across the globe. From an original idea of separating the influence of Wall Street on politics, the list of "demands" (desires, really) have grown and morphed into a collection of ideals covering the realm of economic justice and fairness. They have stubbornly refused to declare leaders, which may or may not be a hinderence in achieving their goals. There's also a lack of direction in terms of achieving their goals as they claim to be loathe to embrace the political process. That may also be a hinderence.

Nonetheless, their message is ringing true to millions of Americans, who - despite working hard and doing what they were told was required to acheive the American Dream - find themselves one paycheck away from ruin. The Free Market policies and tax cuts for the rich have resulted in an upward migration of wealth to the 1% that the OWS protest has targeted. There is no shortage of wealth, it's just being held by a few people, and a lot of them are hoarding. That hurts the economy, because the money is not in motion. 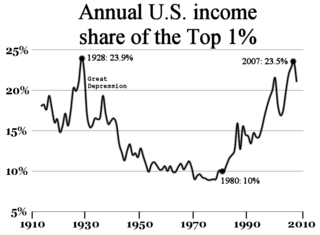 It clearly shows us returning to the "gilded age" prior to the great Wall St. crash and the Great Depression. From the 50s to the 80s, the tax rates on the rich were very high. Yet - there were still rich people who enjoyed their money, but there was also a strong middle class of people that worked regular jobs and were able to buy houses, cars, go on vacation... The high tax rates on the "job creators" did not prevent them from creating jobs. As we swing into another gilded age, the rich are richer than ever, enjoying record-low tax rates. Yet despite all their wealth, the unemployment rate is still high. As "job creators", they are doing a very poor job.

Most of the solutions to these problems (reinstating Glass-Steagle and/or other regulations on the financial industry, and raising taxes on the wealthiest) require action in Congress. The Republicans currently control Congress, so that is not likely to happen. President Obama can only do so much. One area of contention with OWS is the subject of student loans. This is something the president CAN act upon, and he is trying to accelerate a plan to cap max payments at 10% of income which was scheduled to go into effect in 2014:

Obama plans to accelerate a plan to cap student loan payments at 10 percent of income, bringing it forward to start in 2012 instead of 2014.
"Steps like these won't take the place of the bold action we need from Congress to boost our economy and create jobs, but they will make a difference," he said in a statement.

The loans initiative will be the third such move by Obama in as many days, following action to aid homeowners and boost hiring of military veterans. The White House wants to show he is an activist president battling a "do-nothing" Congress.

The loan changes do not require approval by Congress.

As these protests have popped up in various cities, the local governments and police have taken different tacts in dealing with them. The protesters - most of whom are not actually homeless - are living as if they are. They are camped out in the urban landscape, and in some cases mingling with the local homeless. That has created an interesting synergy, as described in this excellent article in the Washington Post about the Occupy DC protest:

More than any other group in the District, the occupation movements are affecting many of the city’s estimated 6,500 homeless — most of whom sleep on the streets or in emergency shelters. Although protests are routine in the nation’s capital, it’s not every day that demonstrators rally in someone’s bedroom.

In growing numbers, the city’s homeless are embracing the 100-plus tents at Occupy D.C. in McPherson Square and the smaller Stop the Machine encampment at Freedom Plaza. With the Occupy Wall Street movements decrying what they labelcorporate greed, protesters said the stories behind the District’s homeless are emblematic of a political and economic system failing the lower class.

Although some of the homeless resent the newcomers’ claim on the park, many said the new neighbors are doing what city leaders have struggled to do for years. The protesters are raising awareness while boosting their quality of life by bringing a sense of security and community to an otherwise cruel existence, many of the homeless said.

“It’s a good cause, and I hope they are here for months,” said Lynwood Baylor, 64, who sleeps in a shelter but sits on a bench in McPherson Square during the day. “This is the first time I have seen so many people [at the park] for the same thing. There really is strength in numbers.”

I highly recommend reading the article, as it provides a LOT of food for thought. There was one quote, though, that stood out:

“How do you tell the difference between homeless and protester?” asked Lt. Mike Libby of the U.S. Park Police

Why does it matter? They want to be able to arrest protesters, but not the homeless? On what grounds? The protesters are essentially doing the same thing as the homeless.

That aspect of it created a much nastier scene in Atlanta, where camping in public parks is prohibited by law. The police arrested anyone who remained in the park, including the homeless. The Occupy Atlanta protesters had pre-arranged for bail, but the homeless were not so lucky (FYI - the article at the link changes, so I am loathe to quote from it). Other cities have seen similar police crackdowns, but it's not clear how many innocent people are getting swept up in the over-reactions. It's been well-reported that at least one CitiBank customer was arrested in New York when she was in the bank at the same time as OWS protesters going there to close out their accounts. Other cities have seen SWAT teams using brutal tactics to clear protest areas.

The tension is clearly building, as city governments are trying to understand how to deal with protests that aren't started and ended over a day or weekend. Cities have tried to be humanitarian with the homeless, but as this movement grows of people willfully being homeless in an effort to petition the government with their grievances, the government is unable to ignore them, and their frustration is spilling over into fascist-type suppression, which only serves to make the message ever more clear.

And perhaps that alone will result in action by those in government with the power to make change. If not, I fear that a lyric from Jesus Christ Superstar will come true:

Why waste your breath moaning at the crowd?
Nothing can be done to stop the shouting,
If ev'ry tongue was still, the noise would still continue,
The rocks and stones themselves would start to sing
41 comments (Latest Comment: 10/27/2011 01:38:40 by wickedpam)
Perma Link