But even July 4 isn't accurate; we all know that it was today that the documentation was actually adopted by the Continental Congress - in those days it took a little while to write things up and get them published, so it was on the Fourth that the facts were submitted to a candid world.

Sure, I'll have my flag up most of the weekend. I'll even fly the regular old Stars and Stripes. I have a lot of historical flags and I actually don't often fly the 50-star flag. I've always favoured the Bennington, but I suppose that's a story for another day.

I live up here in the Northeast, and you probably know about that little shindig we have every year with some symphony along the river. You all get to see only the last hour or so on the national broadcast, but the concert is a lengthy affair that usually clocks in at around 3 hours or so. We get to see it all locally, but I digress. For Boston, it's just the capping moment of our week-long summerfest. Other places have "Fleet Weeks", and that's going on here now with a harbor full of Navy ships. We also get re-enactors, patriotic displays, and of course Chowderfest! (Sorry Manhattan, you automatically lose this round.)

But it all seems in-context somehow. It's not that far away from the downtown festivities where the Battle Road sits in honoured glory; you can see places like Bunker Hill, Griffith Wharf (site of the Tea Party) and of course the Cradle of Liberty right here at Faneuil Hall.

Up and down the East Coast, places like New York, Philadelphia, Baltimore, the Virginias, South Carolina - we've all got equal rights on independence and glory.

We've all seen it - that "Agressively Patriotic" display of stars and stripes, sometimes wildly inappropriate. Of course, there's the hijacking of our cherished icons for many questionable or political purposes - not the least of which is the "Tea Party" itself, or those citizens patrolling the border that call themselves "Minutemen". These are not the same things.

I suppose all of these things are part of our DNA. Whether I fly a Bennington flag from my porch on a couple of national holidays, or some guy in Texas has painted his F-150 to look like a Bicentennial-Era aircraft, we're all Americans this weekend. Let's at least try not to shoot each other, mmkay? 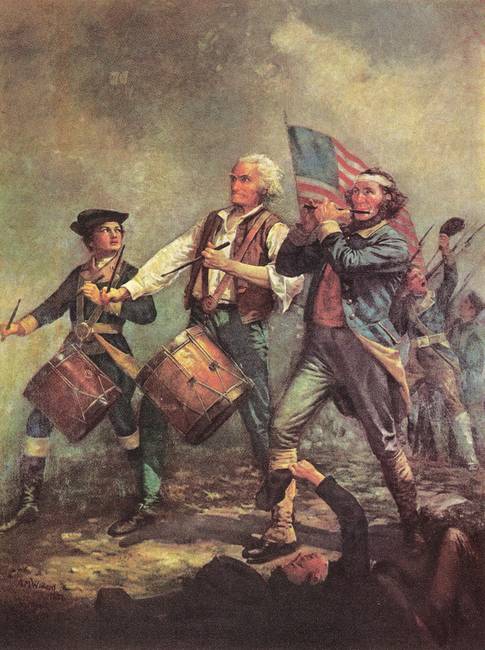