We interrupt our regularly scheduled Ask a Vet for a little history today.


On November 28, 1942...near the site of the present Revere Hotel here in Boston there was once a popular nightclub called the Cocoanut Grove.

I've already written a blog about this one, 8 years ago now, so I won't actually rehash much of the detail.

But it is ocassionally part of my tour, so I want you all to think about this.

The next time you're in a public building, take a look around. See all those lighted emergency exit signs? If the building has a revolving door, you'll notice emergency doors on either side, or if not, the central section collapses so you can use that as an exit. All the doors in any public building now open outward so you can get out quickly in a panic situation.

All of these reforms came about as a result of the Cocoanut Grove fire. 492 people were killed that evening, and the Boston fire marshall estimated that perhaps 300 more could have gotten out if the building was set up with proper exits.

Of course, there's been some commemorations around the city. A handful of survivors were at the Revere Hotel over the weekend to see a new film about the fire.

There is a large photo spread on WCVB as well. If you're leafing through the pictures, note what's left of the bandstand and the dance floor. My grandfather was almost there; he was a member of the house orchestra during the summer of '42, but wound up quitting a mere two weeks before the fire to take care of his wife and newborn baby (my mother) as grandma was having a difficult post-partum recovery.

Of all the musicians working at the club that evening, only three of them lived to tell the tale.

Of course there were many legal repercussions and lawsuits after the fire, and like so many things in the United States, it took massive tragedy before any true reform took place. A lesson we have seemed to have forgotten regarding guns, but that's a blog for another day.

But given our propensity to memorialize everything these days, the fire itself is actually strangely unknown in this city, and has somehow failed to enter National Consciousness like many other disasters. The only notice of it at all is this small plaque, embedded in the street, down a side alley a block from the actual site of the fire. (The actual location is now a parking lot - it was never renovated after the fire.) 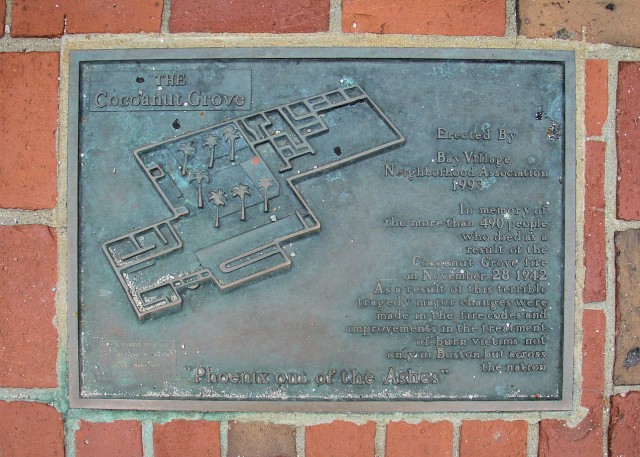